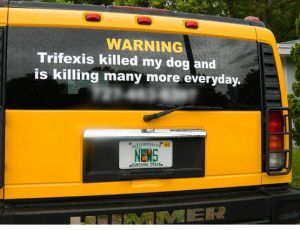 A recent article published in the Indianapolis Star has questioned the safety of certain veterinary medications, along with the relationship of veterinarians, pharmaceutical companies, and their ethics. The drug in question is Trifexis; here is some of the article:

Harry, Sesame, Ramsey, Kolbe, Rocky, and Peaches have something in common — all of these beloved pets were prescribed a new chewable flea and heartworm medicine. And now they’re all dead.

Their owners wonder if the drug, known as Trifexis, was the cause.  Several things about the drug make them suspicious. Trifexis, like many new pet drugs, was not developed specifically as an internal medicine for dogs. One of its two active ingredients started out as a crop pesticide.

Trifexis, which was developed by Eli Lilly and Co.’s animal drug division, Elanco, based in Greenfield, has many reported side effects. An Indianapolis Star investigation found that one of its two active ingredients, spinosad, ranks third among all pet drug ingredients for reports of convulsions, fourth for blindness, sixth for aggression and paralysis, and seventh for reports of unconsciousness, according to the latest data available from the FDA.

The other active ingredient, milbemycin oxime, ranks fifth for convulsions and ninth for deaths.

Dog owners across the country have reported more than 700 deaths to the FDA since the drug hit the market in 2011. And the FDA estimates that for every side effect that’s reported nine times as many go unreported.

Trifexis is far from the only pet drug with hundreds of side effects and deaths reported. The database includes more than 19,000 dog and cat deaths reported in connection with a wide variety of pet medicines.

But did Trifexis kill Peaches? Ramsey? Rocky? What is the risk of it — or of other pet medicines — killing your dog or cat?

To such questions, pet owners simply can’t get an independent answer. Not from veterinarians. Not from the FDA, whose job it is to ensure drug safety.  The companies, of course, insist their drugs are safe.

In a prepared statement, Elanco told The Indianapolis Star: “It’s critically important to understand that reports are not an indication of cause. For any given (Adverse Drug Event) report, there is no certainty that the reported drug caused the adverse event.”  The article then goes on to explore the fuzzy relationship of drugs, veterinarians and money. Then the ‘Veterinarians can do NO wrong’ site, dvm360 has since responded defending veterinarians’, industry’s motivations and sense of ethical propriety.  By dvm360.com staff:

AVMA President Ted Cohn, DVM, wrote a letter to the newspaper’s editor to criticize the coverage.

While you tried to paint a picture of veterinarians being beholden to pharmaceutical companies for monetary gain, you failed to cite even one specific case of impropriety or lack of professionalism. The same can be said for your suggestions that the AVMA annual convention “revealed just one of the many ways corporate money influences pet health care …  threatening the objectivity of those prescribing drugs to your dog or cat.”